As I am sitting here in the back office typing , the second group of guys are heading down a narrow mountain pass to the mouth of the Sixiola river in Costa Rica.  What a really crappy feeling ! , not going down the pass , but typing this while I know what is going to happen once your fly hits the water,... 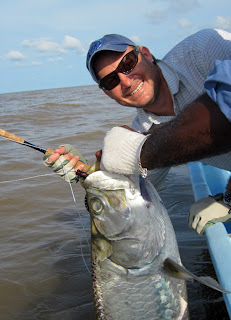 In the past eight years our travel side , FlyTravel , has taken us and a bunch of really great guys and girls to some of the globes most exotic , far away places one could whish to visit. The best part of this , but definately not the most important , we always had a fly rod in somewhere in the bag. 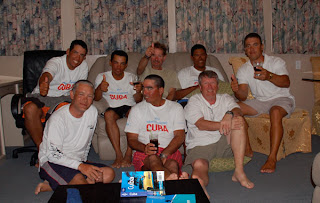 With 2012 nearly kaput , i look back at some of the highlights we had.

Sterkfontein ,  where else in the world could you sight fish to golden yellow Small mouth and bullet silver Large mouth yellow fish. As your Good Doctors Beetle hit the surface , the yellow accelerate and literally nail your fly as if he wants to kill it ! 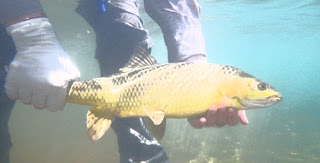 Then I was of to CUBA , this was my 3rd season to the land of Bonefish, Permit , Tarpon and the Salsa. Not to forget the Cuba Libre's , Mojitos and White Daiquiris ( men don't do pink drinks). Unfortuanately we had a really bad patch of weather, the clouds were very low , thus we could not sight fish to cruising Tarpon. 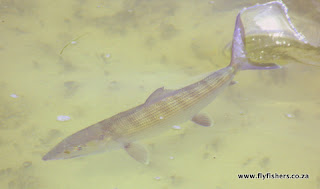 My fingers are all typed out now . I will carry on with Bolivia , Zambia and Costa Rica tomorrow, ...

Well , it has been some time since I last published something on the blog. Plenty fish have been caught and lost , lots of new fishing friends made , and even more knots tied. All and all a awesome time next to a piece of water be it a river in Zambia or on a skiff in Cuba.

This is some photos of our recent trips to Sekoma Island , Zambia. 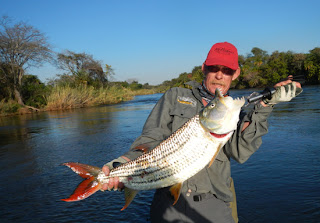 We had a awesome time. Murray is still out there as i write this . Who knows , maybe tomorrow someone hook and land the elusive 25lb'r . We have seen those guys around.

Thanks for looking at this , have a great weekend!

Something new from Thomas & Thomas ,

As saltwater anglers we all endure a love-hate relationship with the ever-present wind. You know it and we know it – the biggest fish get caught on the windiest days.

The new Thomas & Thomas TNT Saltwater Series is designed to ensure that you are equipped to deliver heavy flies in to relentless winds with an unprecedented level of power and accuracy. And if the fish changes course simply pick it up, shoot in to the back cast and lay it back out. This is a rod for advanced casters and die-hards of the flats. If you pray that tomorrow your favorite weather girl calls for clear skies and 20 mph winds then you owe it to yourself to check out the TNT series – pure dynamite.

The Technical Take
The TNT’s are the first Thomas & Thomas rods to be constructed using the highest modulus graphite’s and advanced resin’s available. These materials enabled us to significantly reduce the diameter of the blank while still achieving the stiffness desired of a saltwater rod. This has resulted in the lightest, strongest rods we’ve ever built.

Rod Designer, Tom Dorsey, explains,
"Knowledgeable rod designers understand the significant benefits of a lighter shaft weight and diameter – low inertia, better dampening characteristics for cleaner loops and increased energy transfer to the fly line. The challenge is to achieve this while retaining rod strength. The blend of high modulus graphite’s and state of the art resins has enabled us to achieve this to a degree we previously thought impossible. To the best of my knowledge we have created the lightest, most powerful saltwater rod blanks built anywhere.

It should be noted that we have resisted the temptation to compromise on the density of our cork or ‘skeletize’ our famous saltwater reel seats, in order to claim further weight reductions. We believe that doing so would be counter-productive since these parts of the rod have a miniscule effect on the rod’s casting dynamics and a huge effect on the rods durability and aesthetics. Reducing weight in the rod shaft - in front of the hand - offers the maximum potential for performance improvements and has been our principal focus.”

The Thomas & Thomas TNT Series represents the thinnest, lightest, fastest saltwater rods we have ever launched. Anyone with decent timing and a good double haul is going to be throwing the full line and more in the car park. But it’s on the water where these rods really excel. At typical fishing distance of 45’ – 75’ the TNT’s generate maximum line speed with minimal false casts. The tip has been tweaked and re-tweaked until we feel we have got it just right – light enough to throw tight, wind-cutting loops but stiff enough so as not to collapse when picking up line off the water.
Do not expect this rod to be generously forgiving. Its not - but nor is the salt. Quite simply, this is a rod that will assist capable anglers to catch more fish even in tough conditions. We’re not claiming any proprietary technology or inventing new words to describe this level of performance.

Llewellyn pulling a Dorado on the new TNT 8wt ( Bolivia)

But we are claiming to have taken the best materials available, combined them with T&T know-how and build quality to produce a rod that looks stunning and delivers performance to match. We’ve put this rod in the hands of some of the best saltwater anglers and guides around and their reactions are always the same – they cast, they smile, they nod, they say, ‘I want one’.
That’s the truth. And that’s the reason we’ve got a feeling the TNT’s will be ‘the saltwater rods you’ll eventually own’.

Hi All ,
We have decided to move our blog to a different address, in future our blog posting will take place on this address:
http://flyfishers.co.za/blog/
Please have a look , you are also more than welcome to submit any flyfishing related article on the new blog.
All the best
Ricko
Posted by Ricko at 1:50 PM 1 comment: 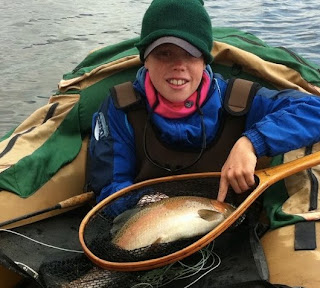 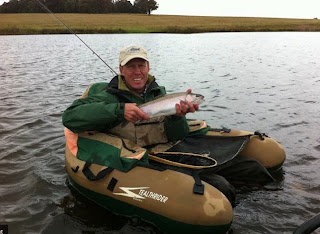 Murray with another Middelpunt Silver , the Pappa Roach was the number 1 fly once more.
Thanks Hanno for the photos.
Posted by Ricko at 12:05 PM No comments: 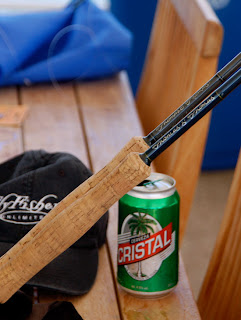 The Thomas & Thomas brand, machinery, inventory and all other assets were sold to Islamorada, FL based fly fisherman Mark Richens. Concurrent to the asset purchase, Richens also agreed a deal to buy the Thomas & Thomas rod making facility in Greenfield, MA from Lon Deckard of Osprey, FL. The financial details of both transactions were undisclosed.

Metcalfe explained. "The Thomas & Thomas brand is under new ownership. This brings to a conclusion the events of recent years that have troubled Thomas & Thomas Rodmakers. Despite my best efforts, issues arising from the withdrawal of bank funding following the financial crisis of 2007 and 2008 have proven insurmountable. The team at T&T produced fly rods of the highest quality throughout difficult circumstances and I wish to take this opportunity to thank them for their hard work and professionalism.

It is my understanding that Mark will continue making bamboo, glass and graphite rods in Massachusetts under the Thomas & Thomas brand and will seek to recruit key personnel locally. Mark also advised me that he intends to honor warranty repairs on existing T&T rods. He will be issuing his own press release to this effect once he has had chance to discuss his plans with the many industry figures that have supported Thomas and Thomas so loyally over the years.

After putting so much into the company I am delighted to see Thomas & Thomas in the hands of someone with a full appreciation for its rich, forty-year heritage. I know Lon Deckard feels the same way.

Mark Richens is a fanatical fly fisherman, a long time user of T&T rods and a regular on the saltwater flats and trout and salmon streams of North America and beyond. At 39, he has the drive and acumen to re-energize this prestigious brand. He is unwavering in his belief that there remains a place for high quality fly rods, built entirely in the USA by craftsmen. I wish him and all involved with his new company well for the future." 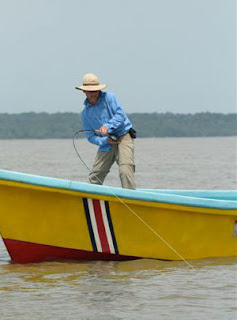 From our side , we will support Thomas & Thomas for as long as we are around!
Posted by Ricko at 2:52 PM No comments:

Hanno , CJ and myself had a awesome morning out trout fishing yesterday in Dullstroom. Even though the wind was pumping we still manage to get some good trout. 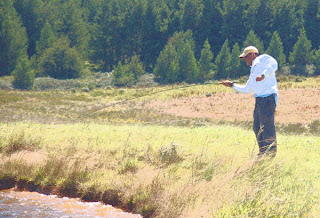 Hanno into another Trout , CJ on his way to net the fish.

CJ into his BIG trout of the day, a good five pounder. 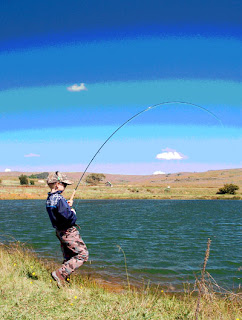 We had good success on dragonfly nymphs and the always popular "WHITE" egg. Hanno fished the egg and a # 16 mayfly nymph suspended below a indicator. 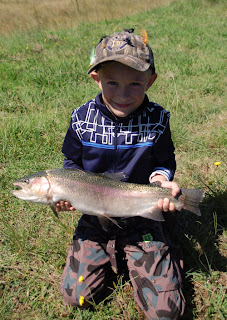 One more for the " How's your Trout " log book.
Thanks guys for awesome day out!!
Posted by Ricko at 8:32 AM 2 comments:

On our recent trip to Sterkfontein we found the Yellow's were not really eating the conventional flies we always used. Well we had a surprise up our sleeve's 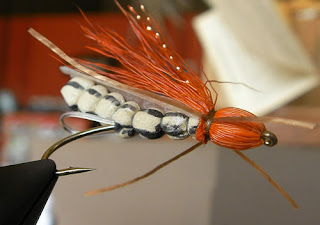 Notice the nylon loop tied in at the hook bend. Most of you are familiar with static nymphing for trout. One would suspend a team of nymphs ( flies) below a strike indicator or a high floating dry fly. 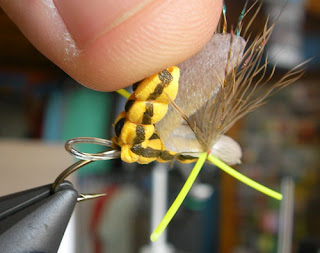 Well with this loop , one would tie your team and the just loop to loop it to the BIG hopper. Some fish even had a go at the hopper! 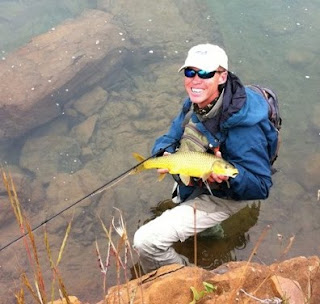